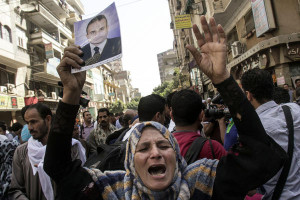 An Egyptian military court has sentenced 418 alleged supporters of the banned Muslim Brotherhood, mostly in absentia, to prison terms from two years to life imprisonment for involvement in violence at a police station in 2013.

Court documents show Thursday’s decision was related to the storming of a police station in the Minya area in August of that year, after the military forcefully cleared two Brotherhood protest camps in Cairo, killing hundreds in the process.

The court sentenced 350 defendants in absentia to 25 years or life imprisonment, while 68 defendants present were sentenced to between two and 10 years, for “belonging to a banned group” and “sabotage of public facilities and police.”

Egyptian President Abdel-Fattah el-Sissi’s government has cracked down heavily on the Brotherhood and other forms of dissent.