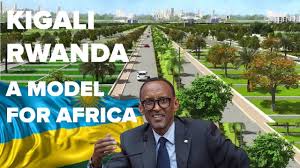 NEW AFRICA BUSINESS NEWS, Freetown, Sierra Leone- There are explicit benefactors that saw the economy grow at such a high rate. These include construction activity, retail and wholesale trade, as well as food crops, among others.

“We are a young economy where everything tangible that happens in the economy can felt. This is different from developed economies where huge things must happen,” he said.

Construction was the top contributor to the growth realized in the second quarter. Construction activities expanded 32% driven by mega government projects and a few private sector led activities.

“In quarter two, we saw big construction projects happening and others completing. The growth in the construction activity in quarter two would be attributed to major government projects,” Murenzi noted.

Some of the projects Murenzi referenced, include the recently completed Kigali Arena, the ongoing construction of Bugesera International Airport and several road networks being undertaken by the Government.

The growth in construction soared demand in mining and quarrying activities like sand and stones, which during the same period grow by 36%.

Murenzi said that, they have seen construction being closely linked to other activities like manufacturing, indicating that some domestic manufacturing factories for instance achieved a turnover of more than 43% of their output.

The official said construction is also linked to imports, reflecting why imports of construction materials and petroleum products increased by 32%.

Murenzi insinuates that, most of the imported products are capital goods, which he said “are good for the future of the country”.

“These capital goods make sense because they bring returns in the future. You are talking about products used to construct establishments like Kigali Arena,” he said, adding that construction is also linked to transport, since more goods are being transported from one place to another.

Wholesale and retail trade activity basically the distribution of goods, was another top driver. It grew 23% He said. “Some things are not independent they are interconnected. But some others shake much.” Another outstanding activity was the increase in food crops, a field that contributes more than 60% to the entire agriculture sector. Food crop production grew by 4% and contributed 0.6% to the overall economic growth. Generally, this implies that more jobs were generated and more private sector activities were taking place as a result of the growth and this could be seen through the performance of services such as the financial factor.

Credit provided by financial institutions to the private sector in the same quarter grew significantly, accordingly to Murenzi.

Financial institutions like banks, drive the economy through a number of ways, one of which Maurice Toroitich – The Managing Director of BPR Atlas Mara, says is through the provision of private capital.

“Banks provide capital for investment and trading which in turn creates demand by the market for goods and services. This demand furls growth in economic activity,” he noted.