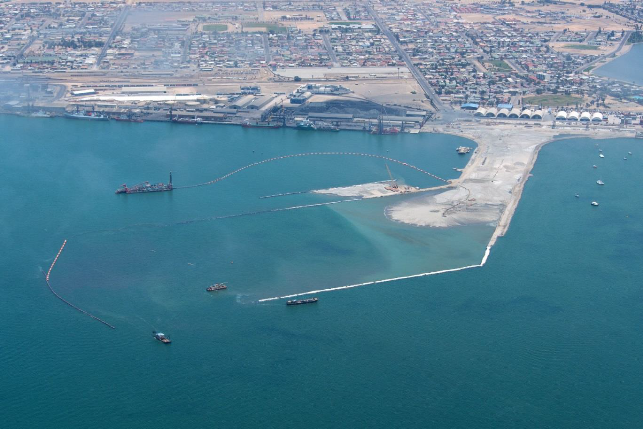 NEW AFRICA BUSINESS NEWS, Freetown, Sierra Leone- Fire boats perform during the inauguration ceremony of the new container terminal in Walvis Bay, Namibia. Namibia’s ambitious effort to become an international trade hub and transition from one phase to another advanced further on Friday 2nd August 2019 with the official inauguration of the country’s $ 200 million new container terminal in Walvis Bay by the country’s President Hage Geingob.

The new container terminal located in the port town of Walvis Bay was constructed on 40 hectares of land reclaimed from the sea by China Harbor Engineering Company Limited (CHEC) under just five years. The container handling capacity of the new terminal was increased from the current 350,000b container to 750,000 per annum.

Speaking to around 1,500 attendants at the terminal, Geingob said that, the milestone is yet another indication that the country continues to make great strides towards achieving developmental objectives as outlined in Namibia’s vision 2030 strategic plan.

“Today is a culmination of a long cherished vision of transforming Walvis Bay, from a predominantly fishing harbor inherited at reintegration into Namibia, into an express-hub to international markets’. He added.

Vice President of CHEC, Li Yi thanked Namibia for the opportunity given to them to work on the project as contractor and Li believes that, the new terminal will contribute to the country’s revenue of which the port will be seen as a great asset and leading contributor to development.

To highlight the win-win cooperation on the project Li said, over the five years of construction they employed more than 2,000 Namibians and provided on-site training to over 800 local employees who now have attained new skills in the job market.

During the event, CHEC also donated $69,000 to help assist with the drought currently ravaging the country.

The African Development Banks’ Deputy Director General Josephine Ngure in a statement delivered on her behalf said, the new terminal will definitely change the positioning of Namibia and will open up more opportunities to land locked countries like Zimbabwe, Botswana and Zambia.

Meanwhile, before the actual commissioning of the new terminal, Newport’s new terminal project manager Gelderbloem said, from August 17 to August 24, the port will shut down for the migration from the old to the new terminal. He furthered that; the old terminal will now be used for multi-purpose for non- containerized cargo.