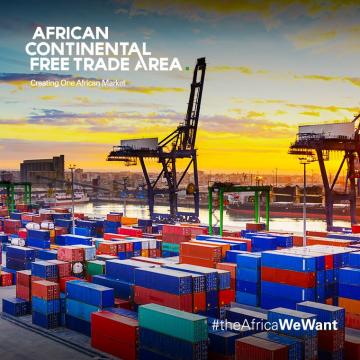 NEW AFRICA BUSINESS NEWS (NABN) Accra GHANA – For the African Continental Free Trade Area (AfCFTA) to see true prosperity, there is a need for stakeholders on the continent to devise digital solutions “designed by Africa and used by Africa”.

This was the principal takeaway from the array of experts who shared thoughts at the maiden edition of the Africa Digital Conference, which had as its theme ‘The Digital Challenge: Africa’s Opportunity Under AfCFTA’.

It was unanimously agreed that wholesale adoption of imported digital solutions, particularly those which take very little of the continent’s peculiar dynamics into consideration, would represent a lost opportunity for the continent to adequately take charge of its affairs and see some of its brightest persons miss out on designing home-grown solutions for Africa.

According to the Minister for Communication and Digitalization, Ursula Owusu-Ekuful, indigenous solutions are crucial for the success of cross-border trade and payment systems, as well as the delivery of equitable social services to people across socio-economic boundaries.

Beyond digitalization, she noted, there is also the need to systematically create opportunities for homegrown start-ups in the space.

In addition, she said: “I believe that if governments can support a vibrant computer hardware manufacturer in one country to supply various schools across the continent, while reciprocating the support to other competitively-advantaged companies in sister countries in other areas of expertise, there will be an increase in the scale upon which these companies can viably establish or cement their operations.

“These are truly the building blocks toward realizing the African digitalization agenda: which is one of more affordable Internet connectivity, more and cheaper credit, more safety, more foreign direct investments, more technology startups, and wealth-creation among others.”

Taking his turn, Director-General at the Ghana Standards Authority (GSA), Professor Alex Dodoo, stated that improving intra-African trade and trade with the rest of the world is not mutually exclusive. Hence, there is a need to approach AfCFTA-related solutions with a global outlook.

“Even though we are trading primarily among Africans, we should be competitive globally. We are not trading just with ourselves, we are trading with the rest of the world. Made in Ghana commodities should be as good as anywhere in the world.”

He added that this can only be achieved if stakeholders from Africa play an active role in shaping the standards for intra-continent and global trade; warning that failure to do so will result in consumption of the “thoughts and processes” of other nations.

“If we do not shape the discussions, we will be consumers of the thoughts and processes of other nations. Globally, these standardization documents are consensus documents developed by states to trade among themselves. We have not participated actively frequently, so we have been consumers of the consensus of others and business drives the world; we need to be at the heart of the consensus. We must lead in this endeavor,” he explained.

According to the scientist and inventor known colloquially as ‘Africa’s father of the Internet’, Professor Nii Narku Quaynor, as Africa races toward solutions for payments and settlements, it must remain cognizant of the advances in digital currencies, particularly those backed by blockchain technology, and introduce a continent-wide iteration specifically for intra-African trade.

Citing a recent study he had perused, Prof. Quaynor said: “We continue to lose billions in intra African trade by trading in a third currency, particularly the dollar. One forward-looking proposal is to take advantage of advances in cryptocurrencies and blockchain and issue an Africa Union Coin (AUC) to fund the Africa Agenda 2063; and we will trade only in AUC among ourselves while the AU coin might be trading on exchanges for increased value”.

He further called for the active participation of indigenous persons in Internet service provision, as well as standardization of the educational and professional requirements for participants in the technology space.