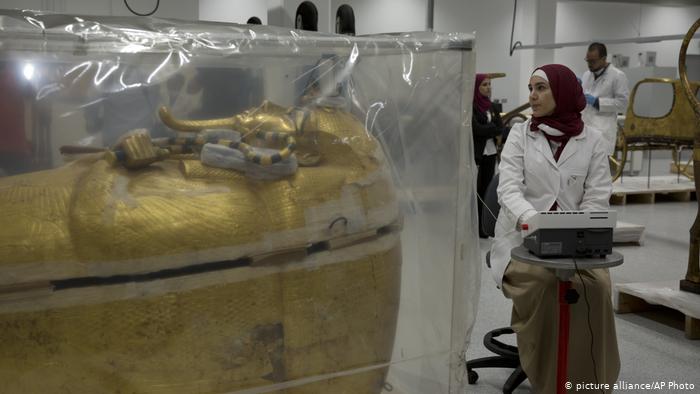 NEW AFRICA BUSINESS NEWS, Accra, Ghana- AT AN up-to-date Conservation Laboratory in the Egyptian Grand Museum (GEM), the large gilded coffin of famous ancient king Tutankhamun was placed inside a plastic incubator for sterilization in order to be later fully restored for the first time since it was discovered almost a century ago.

“This coffin was kept inside the tomb of the king since it was discovered in Luxor in 1922…it is at the GEM now for restoration because its status is very fragile,” Egyptian Antiquities Minister Khaled al-Anany told reporters before he accompanied them at the lab to inspect the restoration work.

The minister said the sterilization work of King Tut’s coffin started on July 22 at the wood restoration plant of the GEM in preparation for an all-out restoration process.

He said the initial examination showed that the coffin was suffering from general weakness and it also had developed cracks in its gilded plaster, especially in the lid and base.

Tutankhamun, who ascended the throne at the age of nine and died at 19, is the world’s best-known pharaoh of ancient Egypt.

The young king ruled from 1332 BC to 1323 BC, during a period known as the New Kingdom in ancient Egypt.

He won his fame for his tomb, which was discovered by British Egyptologist Howard Carter in Luxor in 1922 and has remained one of the best preserved.

The tomb contained three anthropoid coffins nested within each other. The innermost coffin is mummy shaped and made of solid gold that weighs 110.4 kg.

It was found wrapped in linen inside the middle coffin which is made of gilded wood inlaid with multicolored glass.

The middle coffin was found inside the outer gilded coffin which is also made of gilded wood portraying the king in the Osirian shape, with arms crossed upon his chest and holding the insignia, the flail and the crook ornamented with blue and red glass.

Soon after the discovery of the tomb, the inner andiddle coffins were moved to the Egyptian Museum in Cairo, while the outer gilded coffin was left inside the tomb.

Meanwhile, the Director of Conversation Technical Affairs at the GEM, Mr Hussien Kamal, said the coffin was isolated in a separate room for seven days before commencing the sterilization process.

“Analysis and scientific investigation of the coffin have been carried out to determine the damage and the restoration methods as well, adding that the sterilisation process will continue for more than three weeks.”

After the sterilisation, Kamal said, the restoration process will take some eight months, noting that it will be displayed for the first time at the GEM in 2020.Egypt, one of the most ancient civilizations, has been working effortlessly to preserve its rich archaeological treasures and historical heritage, which will also help boost the once-flourishing tourism industry that has largely been affected by the political turmoil over the past five years. Xinhua