Rundu Women Compete with others to buy Cabbages to Resell- Namibia 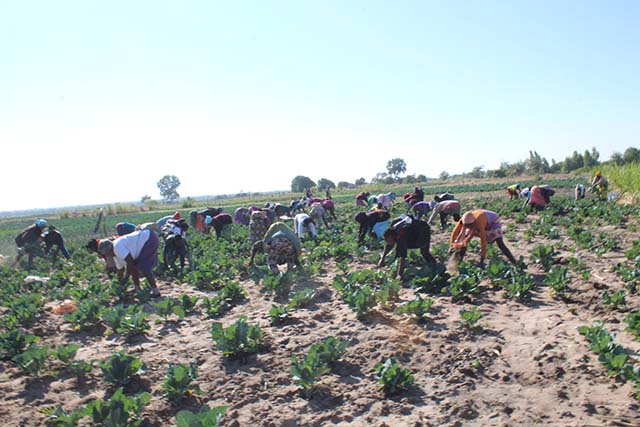 NEW AFRICA BUSINESS NEWS, Freetown, Sierra Leone-  Hundred women selling vegetables in the town of Rundu travel long distances overnight at the Salem cooperatives project to purchase vegetables in order to sell to earn their living. Salem project is an irrigation initiative for small scale farmers that are situated at Uvhungu – Vhungu village in the Kavango East region, about 7 kilometers East of Rundu.

During the hours of 4:00 AM the self employed woman prepared themselves to purchase vegetables at the Salem project in a bid to sell on the streets of Rundu. Some of them do hire transport, while others walk to collect their produce. One of the women grown ups from Sauyemwa said, they go to Salem as early as 3:00 AM in the morning to go and camp there in order to buy Cabbages to sell to support their families. She said, they have forced to do so because of the drought that has hit the country , noting that in the past, they could grow their own produce at their villages.
“We are now forced to take drastic measures of overnighting at Salem to buy cabbages as people scramble for the cabbages there”, she added.
ADVERTISING OPPORTUNITY
NEW AFRICA BUSINESS NEWS IS GOING TO START ADVERTISING FOR COMPANIES, GOVERNMENTS, NGO’s AND FOUNDATIONS IN A FEW MONTHS TIME. YOU CAN ADVERTISE AS LOW AS $11,000.00 PER MONTH PRICE LOCKED FOR UP TO 60 MONTHS. TAKE ADVANTAGE OF THIS GLOBAL, UNLIMITED, OPPORTUNITY WITH AFRICA’S FASTEST GROWING GLOBAL NEWSPAPER. FOR INFORMATION CONTACT US @ INFO@NEWAFRICABUSINESSNEWS.COM
During the visitation of Nampa, at the site on Monday morning; women were sitting next to piles of cabbages waiting to pay for their items. A representative of the co-operative- Laurenta Nkandanga confirmed to Nampa that, women flock to buy vegetables from the co-operative. Nkandanga said, although it is good business for them, they also have challenges of water scarcity as the water pump they  used to pump from the river about 1 kilometer away, does not have the capacity to pump water for all the producers at Salem. She furthered that , the group once bought a bigger water pump, which has been damaged.
“We are just asking any good Samaritan or the government to meet us halfway in order to help us acquire bigger pump that can sustain all of us”. She pleaded.
About 43 small scale farmers  mostly women have been farming with the co-operative on 34 hectare plot. The piece of land was donated by the Sambyu Traditional Authority to set up a cooperative, accommodating small scale farms since 1985.